As the world emerges from the COVID-19 pandemic and struggles to get back onto its feet, it will need to shrug off talk of deglobalisation and embrace a more sustainable sense of collective economic order. The global economy is too interconnected to be torn apart by rampant nationalism. One thing is clear, China is critical in any post-pandemic globalisation. The Center for China and Globalization (CCG), a Beijing-based non-governmental think tank led by founder and president Henry Huiyao Wang, will play a key role as a critical bridge between countries.

One of the more peculiar impacts of the COVID-19 pandemic has been the ramping up of rhetoric about the end of globalisation. Talk of deglobalisation first took hold in the wake of the 2008 financial meltdown. It gathered pace in the face of rising nationalism in parts of Europe and the US, reaching its zenith in the raucous presidency of Donald Trump marked by his raging animosity towards China. However, the worldwide response to the pandemic, as well as the discovery and rapid rollout of vaccinations, are emblematic of a global vantage point. Furthermore, the global economic downturn that accompanied the pandemic highlighted just how interconnected our economies are. If anything, emerging from the pandemic, globalisation is taking its second breath, and China is key to its future health. One Beijing-based think tank is particularly well-poised to help guide its way. 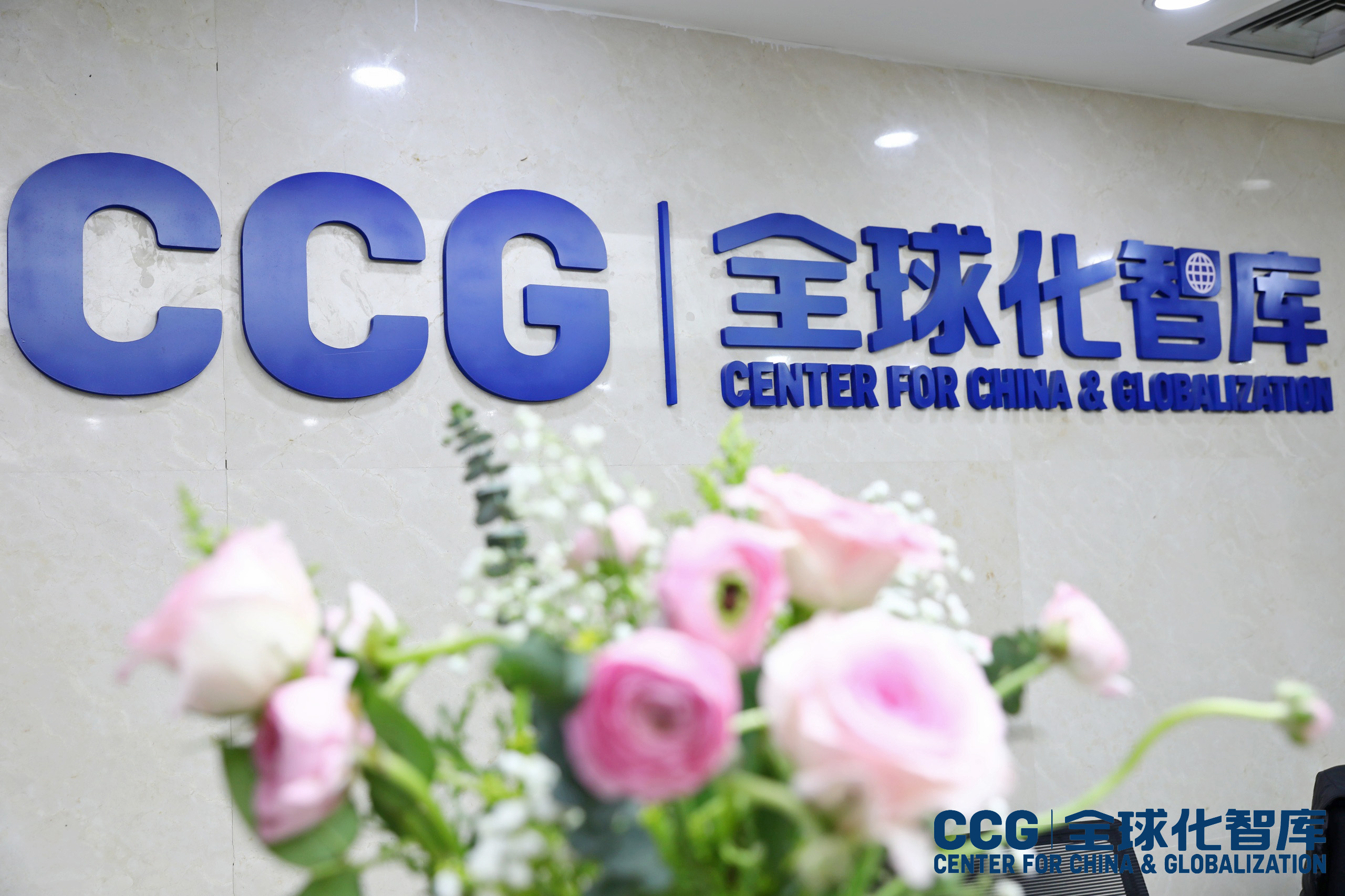 The Center for China and Globalization (CCG) is a leading non-governmental research and policy institute with remarkable credentials and a worldwide impact. Since its founding in 2008, the CCG has grown in stature and reach. In the University of Pennsylvania’s 2020 ‘Global Go To Think Tank Index Report’, CCG was recognised as one of the world’s top 100 think tanks, ranking 64th globally. The international organisation has also been granted ‘Special Consultative Status’ by the United Nations Economic and Social Council (ECOSOC). It is also highly active. In 2021 alone, it hosted five large conferences, over a hundred seminars and forums, and published seven books and ten research reports. But CCG’s heft extends beyond the scholarly.

“Although its organisational feet may be rooted in Chinese soil, CCG’s heart is in a more robust, globalised economy.”

In many ways, CCG is a bridge along the route of post-pandemic globalisation. Although its organisational feet may be rooted in Chinese soil, CCG’s heart is in a more robust, globalised economy. Its founder and current president, Dr Henry Huiyao Wang, is a firm believer in the benefits of technology, cutting trade barriers, and liberalising finance to encourage the global movement of goods, capital, and people. As such, he has built an international research network of leading experts, not only in China but also overseas, to provide effective channels to exchange ideas between policymakers, experts, scholars, international dignitaries, and industry leaders.

Even though it is a non-governmental institute, CCG carries considerable political impact at home, meaning it has a significant impact in official Chinese policy. When Russia invaded Ukraine in March this year and became bogged down in a conflict it had thought it could easily win, the Chinese government sought input from CCG on ways that China could help bring a quick resolution. Writing in?The New York Times,?Wang emphasised that, ideologically, China has common ground with both Ukraine and Russia, but explained the broader urgency of a resolution: ‘China enjoys strong ties with Russia and Ukraine and is both countries’ largest single trading partner, though each trades more with the EU bloc than with China.’ Of course, there’s an even bigger, long-term picture for China.

Russia and Ukraine are vital players in the Belt and Road Initiative – a global development strategy adopted by the Chinese government in 2013 to connect Asia with Africa and Europe via land and maritime infrastructure networks. In many ways, the initiative is the physical embodiment of globalisation. It is also characteristically Chinese in the scope of its ambition and enterprise. This, perhaps more than anything else, is what unnerves some Western nations, especially those sensing their global influence waning.

CCG’s voice and impact are so valuable at this juncture. CCG is not idealistically dismissive of discordant Sino-Western ideologies. Quite the opposite: it is highly sensitive to the historical, political, and cultural differences that have placed Chinese and Western beliefs and priorities at loggerheads and fostered a default context of distrust. Perhaps part of the problem is a breakdown in communication and an unwillingness to listen to contrasting visions.

Indeed, China today has the need for a profound understanding of the importance and necessity of improving China’s global messaging. China needs to understand and to be understood. More effort is necessary to encourage a discourse that can enhance the communication between China and outside world.

The issue is that Western leaders are, unfortunately, intrinsically sceptical of Chinese intentions. This is where CCG is so well-placed. As a highly respected, non-governmental research and policy organisation committed to encouraging global economic development, it has not only the knowledge and expertise to facilitate communications around international cooperation, but also the impact to guide the necessary policymaking amongst all players to make it happen. CCG plays an active role in non-governmental exchanges and Track II diplomacy, becoming a valuable platform to aid mutual understanding between China and the world.

Globalisation is far from dead, but if there is to be any post-pandemic global economic growth, it requires renewed efforts toward more sustainable globalisation. It will require fostering discussions on global governance, international trade, and economic integration with governments and non-government organisations. Significantly, it will encourage respect for China’s responsibility, and in this role, CCG will act as a critical bridge.

Can you tell us a little bit about yourself?

I received a bachelor’s degree in English and American literature from Guangdong University of Foreign Studies. After graduating, I got a job working for the Ministry of Commerce in Beijing and was involved with China’s Going Global initiatives. This is where I gained my first international experience. After three years, I decided to continue my graduate studies in Canada (University of Windsor, University of Western Ontario) and the UK (University of Manchester) where I obtained master’s and doctorate degrees in international management. I then started working at multinational companies. In the 1990s, I got an invitation to join the Quebec government. They selected me as the Chief Trade Representative of the Quebec Government Office in Hong Kong and Greater China. I was an entrepreneur, too, but my interest in academia was always there: I taught at the Peking University Guanghua Management School, the Richard Ivey Business School of Western University, Ontario, and many others.

What led you to founding CCG?

I remember the motto for the Beijing 2008 Summer Olympics was ‘One World, One Dream’ – I understood this to be a slogan of globalisation. I spent almost 10 years overseas working for universities, businesses, and governments and wanted to use this experience to create a bridge between China and the outside world. So, my wife Dr Mabel Lu Miao and I founded CCG.

“Globalisation is far from dead, but if there’s to be any post-pandemic global economic growth, it requires renewed efforts toward more sustainable globalisation.”

We publish mostly academic blue books, on world migration, entrepreneurship, and talent. For the last eight years, the Chinese version of the International Organization for Migration’s World Migration Report is always translated, produced, and published by CCG – this year’s report will be published very soon. We recently published open access books, including China and the World in a Changing Context, Transition and Opportunity, and Consensus or Conflict? with 35 international contributors. We are also organising many forums, including the China and Globalization Forum, the China Inbound-Outbound Forum, and the Global Think Tank Forum (in cooperation with the University of Pennsylvania). In addition, we host webinars to which we invite experts from all over the globe. 90% of our events are available online on our YouTube channel. One recent event was concerned with the situation in Ukraine; we talked with Ukrainian think tanks but also experts from Europe, America, and Russia. We would like to seek a path to discussions on how to resolve this issue and help with decision-making recommendations for the respective governments.

CCG is a platform that connects China and the outside world. Over the years, CCG has welcomed a number of international dignitaries and global opinion leaders, including Condoleezza Rice, Kevin Rudd, Lawrence Summers, Robert Hormats, Michael Froman, Susan Schwab, Wendy Cutler, Thomas Friedman, Pascal Lamy, Graham Allison, along with other former heads of states and ministers. We position ourselves to be a facilitator for exchanges between China and the outside world. So, that’s how we got started and that’s what we are doing today.

What, in your opinion, are the current challenges between China and Europe?

I wrote an opinion piece in the New York Times on the Ukraine war. We would like to see this crisis end; this is an unprovoked war. We feel at the think tank that any war is unjustified; we can always resort to the UN, arbitration, or even discussion summits. China’s government has made it very clear that the sovereignty and the territorial integrity of nations should be respected, and Ukraine is no exception. China’s government has also started to provide humanitarian aid to Ukraine. A Chinese ambassador to Ukraine said China will never attack Ukraine and will always be a friend of Ukraine. So, those are encouraging messages.

Is there anything else you would like our readers to know?

Since our beginnings, CCG has earned credibility in the international community. People who know us think we are very helpful and useful. But we still face much bias. In China, we’ve been called traitors because we are welcoming more global talent to China. The Economist published a piece on this in 2020. Outside of China, some people seem to think that we are part of China’s ‘United Front’. I’m sitting on quite a few organisations. All organisations in China keep some working relations with the government, but it doesn’t mean they are the government. I hold no governmental positions and advise from time to time – but only in a think tank capacity. The University of Pennsylvania recognised us as one of the world’s top 50 independent think tanks, and we have also been credited by the United Nations with special consultant status, which is only given to NGOs. We are frequently interviewed by the international media, and many of them recognise us as a non-governmental think tank, including Bloomberg and NBC.

We are the only think tank in China to have a very active social media presence that presents the views of international people, ambassadors, and multinationals. That’s why we are liked by people both in and outside of China – because we are a very balanced organisation that promotes mutual understanding. All our webinars are streamed live – not very many think tanks in China can do this. This way, people can hear all discussions without delay or editing. We have earnt credibility that stands up, so we hope that we are not misunderstood. 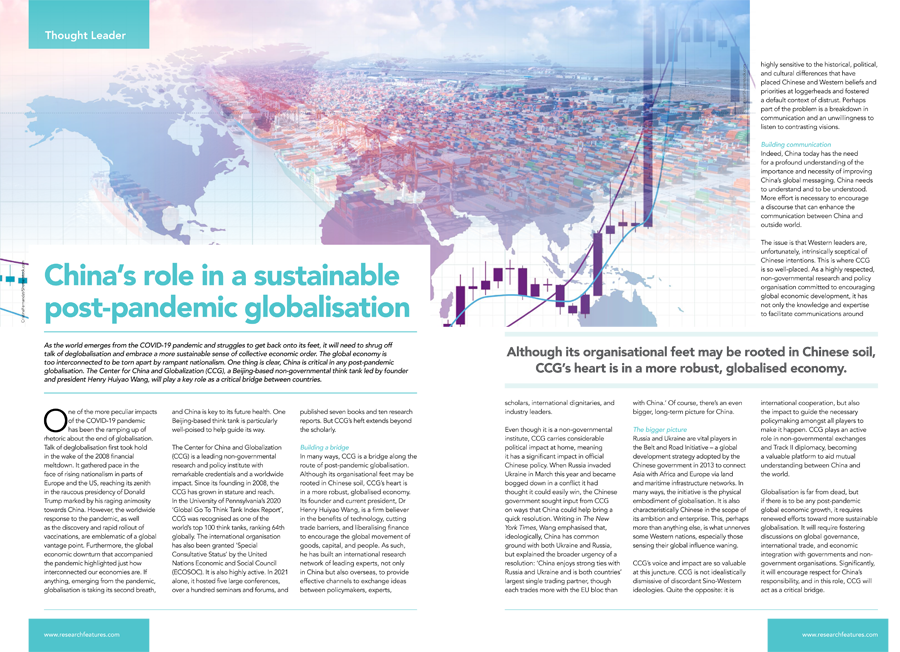 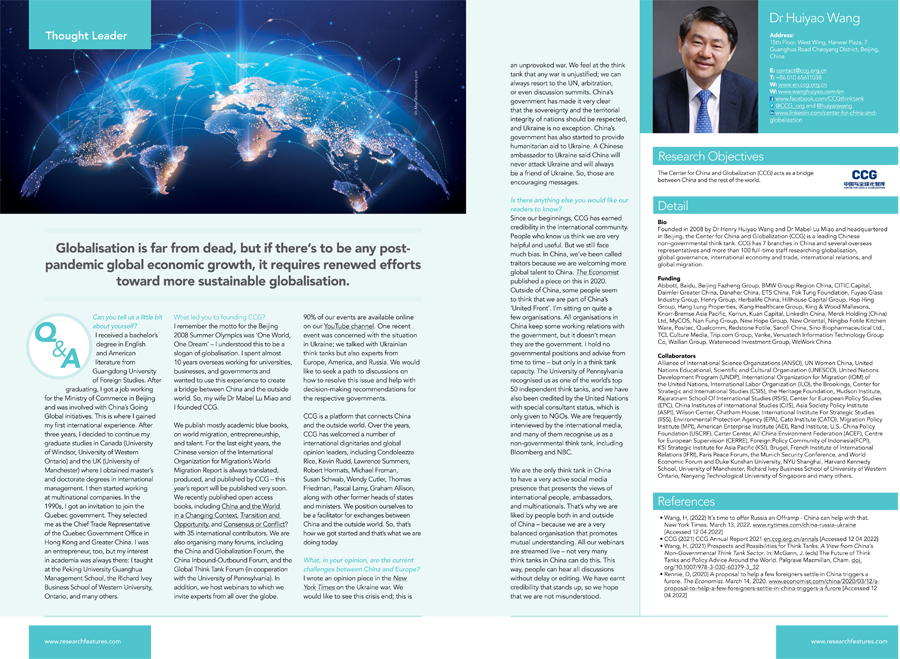