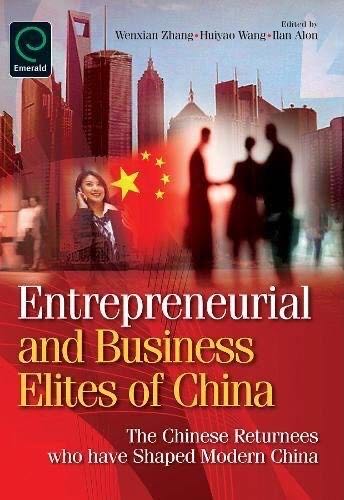 Entrepreneurial and Business Elites of China: The Chinese Returnees Who Have Shaped Modern China

Who are the returnee entrepreneurial and business elites of modern China that have made tremendous political, social and economic contributions to the country? In what ways have they changed the domestic and global business landscapes and fostered a new era of economic development that has set forth extensive globalization phenomena that have reshaped the face of the business environment? This encyclopedia entitled Entrepreneurial and Business Elites of China: The Chinese Returnees Who Have Shaped Modern China edited by Wenxian Zhang, Huiyao Wang and Ilan Alon (published by Emerald Group Publishing Limited) provides an exceptional and systematic review of the top 100 returnee entrepreneurial and business elites that have made such remarkable contributions to China.

China’s business environment has seen significant economic, political and social developments over the last three decades, which has attracted the world’s attention to the country’s dynamic progress. This exhaustive encyclopedia to the returnee business elites of China acknowledges the significant commitments and contributions of these Chinese entrepreneurs and business leaders since the past generations to the reform era in 1978 and to this present day and age. This encyclopedia is collaboratively researched and much supported by over 40 scholars and senior government officials from renown education institutions, business schools, universities and government agencies from namely the Mainland China, USA, Hong Kong, Canada, The Netherlands, Estonia, Israel, India and Malaysia.

This edited encyclopedia begins with an introduction that acknowledges the Chinese returnees as a significant force that is reshaping modern China in terms of the general Chinese society, as well as the specific economic and technological developments. Based on the extensive research of the historical movements of the Chinese returnees, the editors identify five generations of returnees:

1.First generation {1872-1900: learning from the west} whereby the returnees played a pivotal role in the development of modern China’s mining, transportation, communication, government, national defense and the higher education industries. They paved the way towards changing China from an old, feudal society to a nation that is more modern and capitalistic in nature.

2. Second generation {1900-1927: ending the feudal past} included students who have studied in Japan, Europe and Russia and subsequently led the launch of the New Cultural Movement for China in the early twentieth century. They introduced new ideas and cultural ideals, leading to major political reformation for the country.

3. Third generation {1927-1949: founding the People’s Republic} comprising the returnees who studied mainly in the Europe and the USA, in which this particular group gave rise to many Chinese scientists, educators, artists, state leaders and politicians. Eventually, they contributed much to the scientific, educational and political advancements in China.

4. Fourth generation {1949-1965: building the New China} consisted of students who studied in Russia and the former Eastern Bloc nations. These students served as the much needed talent in rebuilding China following the civil war, whereby they included engineers and factory managers that worked in large-scale projects, thus leading to the laying of the foundations for the development of the state economy. However, during the Cultural Revolution, China stopped sending students overseas and in the period between 1965 through 1978, much to its detriment, the nation lost almost a generation of returnees when those who studied or trained overseas were criticized or punished.

5. Fifth generation {1978-present: opening up and globalizing China} concerned the generation of returnees after China launched its economic reform and open door policy in 1978. They formed the newest and largest group of returnees in the history of China and have significantly played a part in opening up and globalizing China, making it the most influential economy in the world.

A unique feature of this reference book is that the biographical profiles of the key Chinese returnees in business and entrepreneurship are alphabetically listed. As such, it allows readers to easily scan through the names of the individuals in a very systematic approach and make the necessary reference about the specific individual’s background. The biographical work covers the various roles and contributions China’s returnees have made and describes the details of their accomplishments and influences with respect to the nature of the business or work that they are engaged in within the new world economy. Many of the reviews about the returnees covered their positions held in their respective companies, their academic achievements either in local or overseas education institutions; repertoires of their extensive work experiences upon graduation, the nature of their organizations’ business operations in the different industrial sectors in China; recognitions and awards in the business community. The encyclopedia also cited the leadership styles, managerial philosophies, personal ideals about business development, wealth-creation strategies and to some extent, their sociopolitical connections or guanxi 关系 attributable to their phenomenal success. In many of the reviews, a good number of the returnees have excellent graduate or post-graduate qualifications, as well as a personal touch and strong sense of business acumen and understanding of the dynamic global markets, such that they are able to establish sound business frameworks and take measures to capitalize on the potential opportunities to yield high profit margins and returns on investment for the businesses they are involved in. Not only are the returnees making their presence felt in the high-tech industry, they are actively engaged in the high-end service sectors such as finance, banking, consulting, law, broking, media, public relations, advertising, tourism, exhibition and education. In addition, traditional industries such as real estate, tourism and hotel are being revitalized using the internet technology. Many of the returnees have also done their part in bringing in significant venture capital businesses to China, as well as fostering the growth of SMEs and listing them overseas in NASDAQ. As a consequence of their positions of influence and experience, they were able to contribute significantly towards the renewed developments of the China in the twenty-first century and towards greater positive outcomes in the globalized world economy.

This extensive biographical encyclopedia should be considered an essential reference book that every business executive must have in his or her office. As this encyclopedia has systematically profiled the top returnee Chinese entrepreneurs and business elites based on the cumulative research efforts of many established contributors, it will serve to be a recognized and respected works of reference for professional executives who seek to have a better understanding and appreciation of the dynamic Chinese market, while doing business with its entrepreneurial elites in China. In addition, the handy encyclopaedia is a useful reference resource for academics, researchers and librarians specializing in the fields of international Asian business studies, entrepreneurship and the modern Chinese business economy. Last but not least, this encyclopedia, coupled with another work of the editors, titled Biographical Dictionary of New Chinese Entrepreneurs and Business Leaders (Elgar Original Reference) would serve as a valuable reference resource in the new twenty-first century economy.