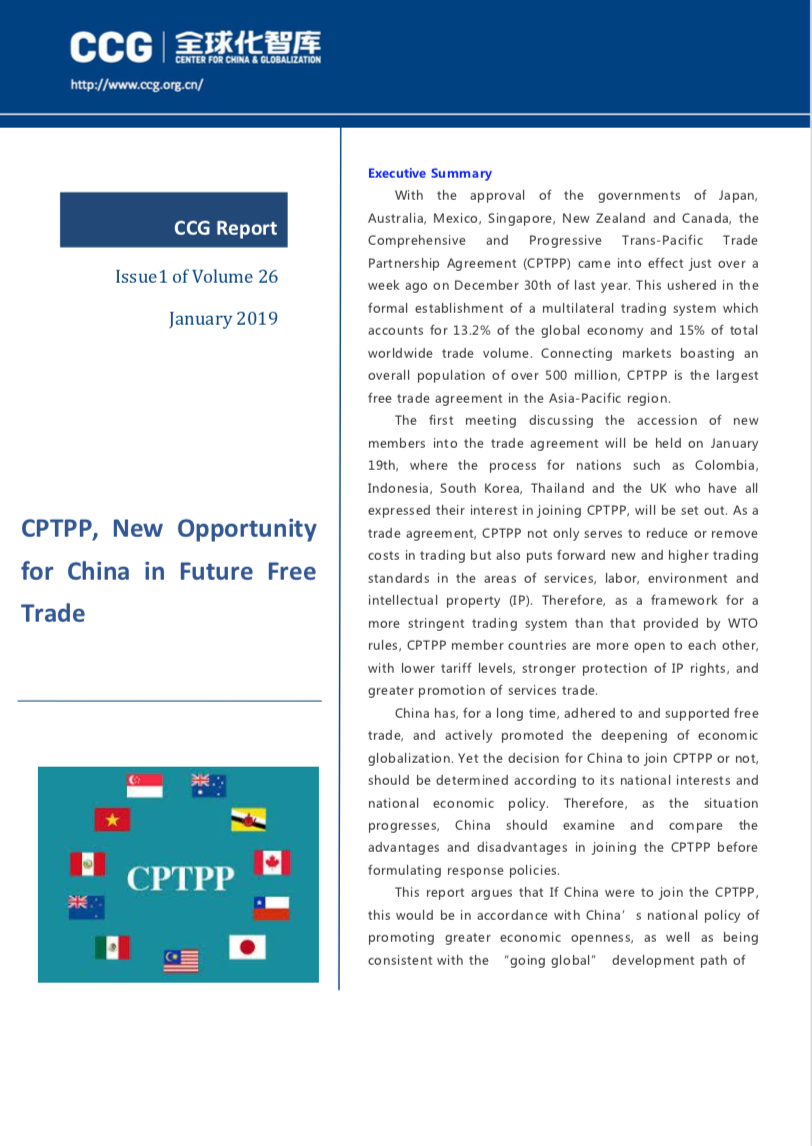 Through this report, CCG aims to examine the relationship between China and CPTPP under the new situation and identify new opportunities and challenges from CPTTP to future free trade development. The report revieiws CPTTP’s evolution and characteristics and summarizes CCG’s previous research findings on TPP and CPTPP.  The report also analyzes the advantages and disadvantages of China’s participation in CPTPP and provides recommendation on how to play a role in the mechanism. At the seminar, CCG invited senior fellow and President of the China WTO Research Institute of the University of International Business and Economics Tu Xinquan and Associate Professor of the Foreign Affairs University Fu Yujun to lead the discussion about the report and other issues related to CPTPP.

The report points out that CPTPP represents the future direction of global free trade. With more than 500 million population, CPTPP accounts for 13.2% of the world’s total economic output and 15% of trade volume. According to WTO statistics, the import and export of CPTPP countries have reached 28.77% of the world’s total in terms of value. Its FDI outflows and inflows account for 34.81%. As a trading system aiming to achieve lower level of tariffs and higher degree of free tradea, CPTPP is created to live up to high expectation, especially when the WTO reform is deadlocked and de-globalization is gaining momentum. Compared to the TPP, CPTPP agreement has less provisions but retains the contents such as the “E-Commerce Chapter”, “Government Procurement Chapter” and “State-owned Enterprise Chapter” that are absent in other free trade agreements. In addition, there are less conditions for CPTPP to take effect and lower bar for accession. Therefore, there is a great prospect for expansion. Meanwhile, unlike other FTAs that are only focused on lower trading costs, CPTPP also includes requirement on labor rights, environment protection, IPR and SOEs.

Regarding the question whether China should join CPTPP, the report points out that China should make the decision based on its national interests and adjust its policies to the changing situation. Considering that China has become the 2nd largest economy in the world after a long term being a developing country, the report suggests that China participate in CPTPP since it fits China’s interest in a long run.  Eighteen years after joining the WTO, China has grown its capabilities and motivation to continue to promote opening-up and free trade. Taking an active role in CPTPP is consistent with China’s principle of promoting globalization. It is also conducive to curbing the current momentum of trade protectionism and promoting free trade on a global scale.

In addition, the report notes that joining CPTPP will also help China to win bigger market abroad for the industries in which it has global competitiveness, such as e-commerce and information technology, and create a fair, free and big world market for Chinese enterprises to “go global”. Secondly, joining CPTPP can help China reduce the structural conflicts in the Sino-US trade relations. At the same time, the report believes that playing a role in CPTPP can help China strengthen cooperation with the third countries in the “Belt and Road” initiatives.

Based on the analysis above, the report suggests that China should proactively engage CPTPP to eventually become one of its members that can share its benefit and contribute to the making of future trade rules. More details of the recommendations are as followed:

1.  While actively participating in CPTPP, China should continue to push forward RCEP negotiations and FTAAP formulation, as well as the establishment of multilateral regional free trade system, such as China-Japan-Korea Free Trade Area Agreement, to create more opportunities and platforms for China to participate in the formulation of new international trade mechanisms;

2.  China should seize the good window opportunity to join CPTPP when China and the US hold a truce in their trade disputes. China should take initiative to release the positive signal to join CPTPP, as a way to gain more support from international community and avoid being isolated from the newly-emerging trading system.

3.  Chinese think tanks, universities and other research institutions should play a bigger role in academic studies and exchange to promote CPTPP. They should be encouraged to increase international cooperation and provide policy advice.

It is the first report on CPTPP from a Chinese think tank after it took effect. It is believed to assist more think tanks and other academic organizations to do more of such research to help form social consensus, which will be a key push for China to take steps joining CPTPP.