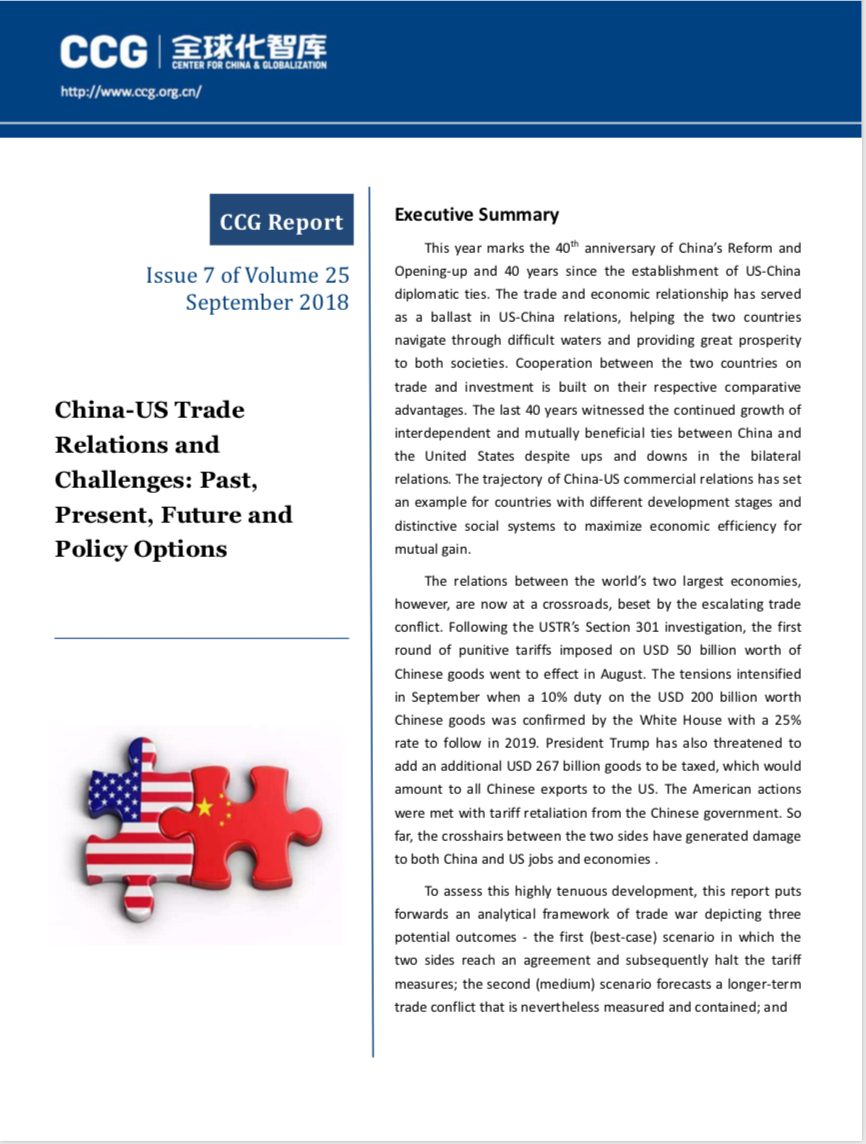 This year marks the 40th anniversary of China’s Reform and Opening-up and 40 years since the establishment of US-China diplomatic ties. The trade and economic relationship has served as a ballast in US-China relations, helping the two countries navigate through difficult waters and providing great prosperity to both societies. Cooperation between the two countries on trade and investment is built on their respective comparative advantages. The last 40 years witnessed the continued growth of interdependent and mutually beneficial ties between China and the United States despite ups and downs in the bilateral relations. The trajectory of China-US commercial relations has set an example for countries with different development stages and distinctive social systems to maximize economic efficiency for mutual gain.

The relations between the world’s two largest economies, however, are now at a crossroads, beset by the escalating trade conflict. Following the USTR’s Section 301 investigation, the first round of punitive tariffs imposed on USD 50 billion worth of Chinese goods went to effect in August. The tensions intensified in September when a 10% duty on the USD 200 billion worth Chinese goods was confirmed by the White House with a 25% rate to follow in 2019. President Trump has also threatened to add an additional USD 267 billion goods to be taxed, which would amount to all Chinese exports to the US. The American actions were met with tariff retaliation from the Chinese government. So far, the crosshairs between the two sides have generated damage to both China and US jobs and economies .

To assess this highly tenuous development, this report puts forwards an analytical framework of trade war depicting three potential outcomes – the first (best-case) scenario in which the two sides reach an agreement and subsequently halt the tariff measures; the second (medium) scenario forecasts a longer-term trade conflict that is nevertheless measured and contained; and the third (worse-case) scenario projects continued escalation into an all-out trade war. Given the potential for further escalation, it is important that the US government looks at possible outcomes and assess the Chinese government’s intentions, the lost opportunities and benefits, and the detriment to the health of both economies and the wider global economic system.

As the world’s two largest economies, the US and China collectively account for almost half of global GDP, underwriting global prosperity. A trade war between the two will inevitably lead to a lose-lose outcome, harming not only both countries but also the global economy at large. While the specter of competition between these two powers cannot be easily dispelled, the bilateral economic relationship needs not be zero-sum. An all-out trade war resulted from unbridled strategic mistrust between the two great powers will behoove either side and pose a threat to global welfare. Washington should not lose sight of the fact that China is not adopting a more confrontational stance toward the US and is always seeking ways to foster win-win cooperation with America to serve its development goals. Drawing on the past four decades’ success of bilateral economic partnership, the current trade dispute should be approached from both sides’ focusing on making the economic pie bigger.

To that end, CCG puts forward the following recommendations for both China and US policymakers:

1. Build on the agreements already reached through bilateral negotiations and work to increase Sino-US bilateral trade and opportunities in services trade.

3. Increase opportunities for US companies in China Manufacturing 2025.

5.Build on the foundation of domestic reforms to rebalance the Chinese and US economies as ways to achieve trade balance.

6.Update the way that Sino-US trade is measured to more accurately reflect the value derived by each side.

8.China and the US can work together to reform the WTO.