Some wonder if Germany’s influence will wane with the coming end of the Merkel era. From China’s perspective, and I suspect for many around the world, I would like to see just the opposite. Like the EU, for all its economic and cultural prowess, there is a sense that, politically, Berlin has sometimes punched below its weight on the global stage. As we enter a more uncertain multipolar age, I for one would welcome Germany to be a more self-assured, proactive geopolitical player, continuing the pragmatism that has been a hallmark of Merkel’s foreign policy, but also be willing to diversify its foreign relations and step into a more prominent international mediating role of the type Germany has proved adept at regionally. The country’s convening power is evident in the continued growth and evolution of fora such as the Munich Security Conference and there is scope to extend this reach further.

Germany’s ability and willingness to mediate is all the more crucial at a time when we see an emerging dynamic that threatens to cleave the world into competing hemispheres. China has no desire to become entangled in a prolonged bipolar struggle with the US, and fully supports a stronger EU that can work with China to reinvigorate multilateralism and play a stabilizing role as part of a China-EU-US trilateral mechanism. Given its central role in the EU, as well as deep ties with both the US and China, perhaps no country is better placed is than Germany to play this mediating role.

Over 30 years since reunification, Germany has benefitted greatly from deepening trade ties with China while largely staying hewn to Washington strategically. In the three decades to come, navigating and balancing the triangle with Beijing and Washington might mean moving out of this comfort zone and being willing to galvanize the EU to play a larger role in bridging between the transpacific powers. That will be no easy task. But no country is more aware of the harm done when we allow the world to be divided by ideology and mistrust. As we move into the post-pandemic era, Germany has a historic opportunity to help chart a different course for the world.

Wang Huiyao is the Founder and President of the Center for China and Globalization (CCG) and a Counsellor of the China State Council. 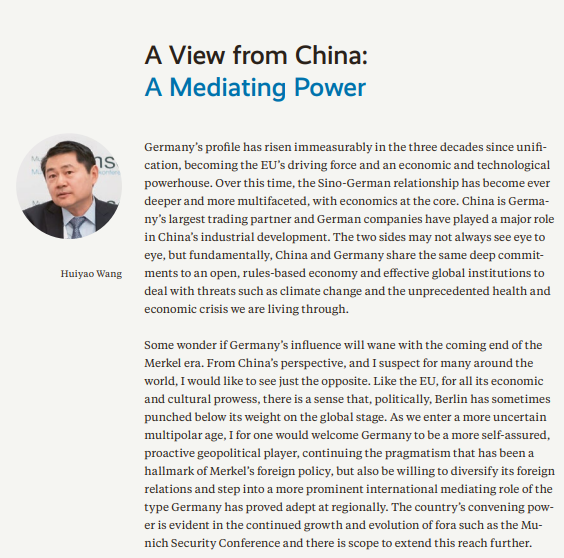