Forum in commemoration of 75th anniversary of UN Charter

To commemorate the 75th Anniversary of the signing of the Charter of the United Nations (UN), on June 24, the Center for China and Globalization (CCG) co-hosted an online forum titled “Enhancing multilateralism to collectively achieve the sustainable development goals” with the Academy of Contemporary China and the World Studies (ACCWS), the Center for International Security and Strategy (CISS), the Dialogue of Civilizations Research Institute (DOC), the Valdai Discussion Club and the British East Asia Council. The online forum included two sub-forums with the theme of “Multilateralism at a crossroads” and “Shared responsibility, shared future” respectively, which brought together nearly 20 experts, former political leaders, and heads of various international organizations, for in-depth discussions on several topics including global governance, multilateralism, sustainable development and global challenges at this critical moment. Multilateralism at a crossroads: challenges, prospects, and innovations for global governance in a changing world 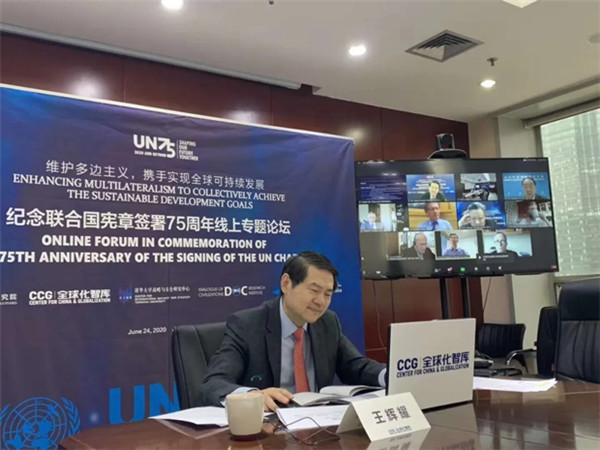 CCG President Wang Huiyao hosted the opening ceremony and said that the United Nations Charter has been a significant cornerstone of multilateralism since it was signed 75 years ago, and the UN has always committed to solving the problems of humankind. He added that in the face of new challenges, people need to learn from the experience of coping with crises from history and re-recognize and rethink the development opportunities of multilateralism.

Former under-secretary-general of the United Nations for Economic and Social Affairs Sha Zukang emphasized the necessity and importance of the UN in global issues. He highlighted that multilateralism is the only way forward. He also said that the way forward to achieve the Sustainable Development Goals (SDGs) is through fulfilling a shared responsibility for a shared future. That is why building a community with a shared future for humankind is key to maintaining global peace, and prosperity, and to achieving the vision of the SDGs. Former French Prime Minister Jean-Pierre Raffarin said that from a historical perspective, the political and economic achievements of the international community have been based on communication and consultation since the end of the Second World War. People need to take COVID-19 as an opportunity to unite and to strengthen multilateral cooperation. He stressed that under the ongoing new challenges, people need to uphold the international system with the United Nations at its core, while international organizations have to constantly reform to adapt to the changing circumstances. Resident Coordinator of the United Nations in China Nicholas Rosellini noted that COVID-19 is the most serious challenge since the Second World War, and it is reminding us of the need for cooperation across borders, sectors, and generations; the importance of aligning our development strategies with sustainability and the urgency of mobilizing actions towards the SDGs. He said that no government or organization can recover from the pandemic alone, thus governments and private sectors must work together to guide the world back on track to achieve the SGDs. Chief of Staff and Sherpa of the OECD Gabriela Ramos said that the COVID-19 crisis has reinforced the importance of transnational dialogue. She added that this dialogue should cover topics such as how to reorder the priorities of identified agendas of SDGs, how to collectively seek global solutions to the weaknesses in international infrastructure and decision-making mechanisms which have been exposed in the COVID-19 crisis, how to coordinate multinational resources for vaccine development, and how to resolve national fiscal deficit challenges due to the pandemic. Therefore, the UN, other international organizations, and all countries should further strengthen international cooperation and multilateralism. Deputy Director-General of WTO Yi Xiaozhun noted that the multipolar global economy is the result of the successful operation of the multilateral trading system, which has benefited many members and enabled them to reach agreement on issues such as e-commerce, investment, and small business development. He said that the biggest obstacle to WTO reform is the mistrust among countries, so he called for rebuilding trust, especially among the big economies, and he said that without trust, there can be no cooperation and consequently no effective functioning of the WTO. Counselor of the Department of International Organizations and Conferences of the Ministry of Foreign Affairs Huang Hongjiang highlighted three key points of the future development of the UN, which can be represented by “three Cs”: the first C stands for commitment, that all UN members must commit to addressing common challenges, especially current crises; the second C refers to capacity-building, which is urgently needed to develop a vaccine for COVID-19; the third C represents cooperation and coordination, which all UN members are should strengthen for peaceful, secure, and win-win outcomes. Chef de Cabinet of the Director-General of the United Nations Office at Geneva David Chikvaidze said that since the beginning of the 21st century, the world has faced numerous and complex challenges and uncertainties, which require all countries work together. He said that before the outbreak of COVID-19, global cooperation was already under a shadow, and countries advocating unilateralism have caused unprecedented negative impacts. He noted that multilateralism is an extremely important framework, and global leadership must adopt a more inclusive and cooperative approach to coordinate forces, instead of simply focusing on one’s own country. Former Undersecretary of State at the Italian Ministry of Economic Development Michele Geraci said that multilateral cooperation has narrowed the gap between rich and poor countries over the past decades, but domestic economic situations have not improved as a result. For example, 80% of Italian people’s real incomes have declined over the past decades. He said that the pandemic reminds us to pay attention to the most vulnerable parts of the national economy, such as the low-income population, and reaffirms the importance of multilateral cooperation and international trade. He stressed that it is crucial to convince leaders with more concrete data, supporting such research is one of the top priorities of the UN, and the Belt and Road Initiative can play its part. World Bank Country Director for China, Mongolia and Korea Martin Raiser said that with support of the UN and the World Bank, the proportion of the world’s population in poverty declines from more than 60% to less than 10%. He said that it is multilateralism that has made these achievements possible, and COVID-19 has made international cooperation and assistance more important than ever, since many of those who have been lifted out of poverty are at risk of slipping back. Furthermore, the pandemic has posed problems in the global food supply, commodity mobility, and other aspects, so the ability of countries to coordinate and achieve common goals is becoming more important, and new partners need to accept this consensus. In the future, developing countries should have a greater say in the United Nations, and multilateral cooperation should be more diversified. Director-General of Paris Peace Forum Justin Vaisse said that it is crucial to promote an inclusive vertical multilateralism. However, multilateralism has been weakened by the influence of some countries in the past one or two decades. He suggested that we should not only rebuild multilateralism but also let more diversified elements and organizations play a more important role, such as non-governmental organizations, foundations, and civil society. At the same time, from the perspective of development, he said that the solution of these global problems and that financial support and investment from the World Bank, public banks and regional banks can be a big difference. Co-founder and Supervisory Board Chairman of Dialogue of Civilizations Research Institute (DOC) Vladimir Yakunin said that despite rising nationalism, unilateralism is unsustainable, and globalization is an inevitable trend. He added that as technology advances, the world needs new trading regimes, and supply chains need to become shorter and more efficient. He pointed out that current globalization lacks global leadership with international vision beyond national supremacy and regional supremacy. He said that global challenges such as the pandemic crisis, global warming, and pollution can be an opportunity for the people of the world to join hands again. Former Deputy Managing Director of International Monetary Fund (IMF) Zhu Min highlighted five key issues in promoting global multilateralism: 1) the need for establishing TTTT system (testing, tracking and treatment system) to effectively contain the spread of the virus; 2) the need for strengthening the global health system through international cooperation; 3) the imperative needs of scientists, laboratories, the private sector, and companies to work together to develop vaccines; 4) the need to ensure a free trade policy to ensure the effective and quick cross-border trade of global medical resources in. short supply, and 5) the need for global cooperation on medical devices, restoration of the economy and financial stability of low-income countries. 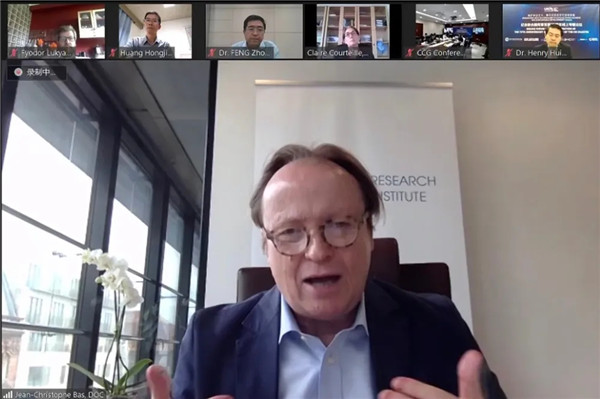 Chief Executive Officer of DOC Jean-Christophe Bas hosted the sub-forum “Shared responsibility, shared future,” saying that despite current difficulties, people are still striving to achieve the 2030 SDGs. He suggested that countries across the whole world should unite as they did 75 years ago to overcome their differences and fight for the common interests of humankind. Director of Country Office for China and Mongolia of International Labour Organization (ILO) Claire Courteille-Mulder said that SDGs and multilateralism reinforce each other, especially in three ways: firstly, the universal acceptance of SDGs helps the legitimacy of multilateralism; secondly, countries need to realize their short-term goals in the planned timeframe in response to the criticism of gaps between commitments and reality; lastly, the inclusiveness of all nations in the face of global challenges such as financial crises and climate change. She noted that better coordination of the UN and other international organizations such as the WTO is needed, as well as stronger leadership. Vice president of China Institutes of Contemporary International Relations (CICIR) Feng Zhongping suggested that China and the European Union (EU) should establish a cooperative partnership and work together to achieve the SDGs, and cooperation between China and the EU under the framework of Belt and Road Initiative will help promote sustainable development, not only in China and Europe but also in Africa, Central Asia, and other regions. He added that the cooperation between China and European counties can set a good example for the rest of the world to deal with global challenges collectively. He also said that globalization will take on a different shape after the pandemic, while SDGs set up in 2015 should be given more attention. UNICEF Representative to China Douglas Noble said that the pandemic has further exposed the existing inequities in the world and posed greater challenges to the achievement for the SDGs. He noted that unintended consequences for children emerge, such as the closure of schools in developing countries that increases the risk of child labor, the displacement of children who depend on school accommodation, the direct threat to children’s health, and even the disruption of education at the national level. UNDP Resident Representative in China Beate Trankmann said that in 2019, the UN stated that none of the 17 SDGs in the Asia-Pacific region had been achieved, and now with the COVID-19 pandemic, the goals have become even more elusive. She suggested that different sectors need to be coordinated, and public finance, tourism, and other aspects should be developed to achieve SDGs. She also said that a low-carbon economy and investments in green industries are needed. President of Academy of Contemporary China and the World Studies (ACCWS) Yu Yunquan said that the international order established under the framework of the UN is vital to the maintenance of peace and sustainable development. He said that to achieve the SDGs, countries need to understand the common future and responsibility and build a global cooperation mechanism of the international community, especially a global health community in response to the pandemic. He suggested that we should take openness, inclusiveness and cooperation as the theme of the new era, to share opportunities, to achieve mutual benefit, and to achieve common development for all humankind.