Wang Huiyao, president of Center for China and Globalization(CCG), discusses the US-China trade war and the prospect of a global recession at Talk to Aljazeera.

In early 2018, a US-China trade war broke out with the two countries eventually imposing tariffs worth billions of dollars on each others’ imports.

As tensions between the world’s two biggest economies continue, analysts warn of potential harm to the global economy.

The IMF predicts that US-China trade tensions will have reduced global GDP by 0.8 percent by the beginning of next year, contributing to slowed global economic growth, which stands at 3 percent for 2019. 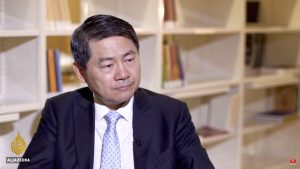 Huiyao Wang, the founder and president of the Center for China and Globalization(CCG), agrees the trade war “certainly is a big deal” for China, calling the situation “unprecedented”.

“China and the US relations this year is exactly 40 years of diplomatic ties,” he says.

“China … largely opened up to the US and actually, for the last four decades, there’s bumps, there’s up and downs, but not as big a surprise as I expect at this one.”

Wang claims that the tariffs have not affected business in China so much as possibly undermined confidence.

“I don’t think there is a lot of economic impact. There could be some psychological impact, people just perhaps withholding from further heavy investing or maybe rolling back a bit of the employment on that. But basically, I think both China and the US are looking towards stability and towards a deal that can be mutually beneficial.”

Meanwhile, Wang agrees that the effects of the trade war could reach beyond either countries’ shores.

“The thing about the China-US trade war is that it dampens confidence, it actually makes people reluctant to invest and also … the value chain is hitted on that. Because China is in the epicentre of the global value chain. You know, a lot of things go through China,” he says.

“So, if China is really hitted by this trade war, all the other suppliers from other regions, from other countries, will all [be] affected … So, in return that will have [an] effect on the US, as well. So, I don’t see how the world economy will maintain such a strong growth and then them become effective.”

He says coming to an agreement with the US is critical, noting that recent negotiations have been a step in the right direction.

“This partial deal that President Trump and China strike in the last month is absolutely crucial. Because if we do not do that, I mean the two biggest economic powers in the world and then, if they really fight … all the others will suffer, absolutely. And then, we may drag the world into a recession. And that’s quite possible, too, and we may have another financial crisis. Because this is really [an] alarming situation.”