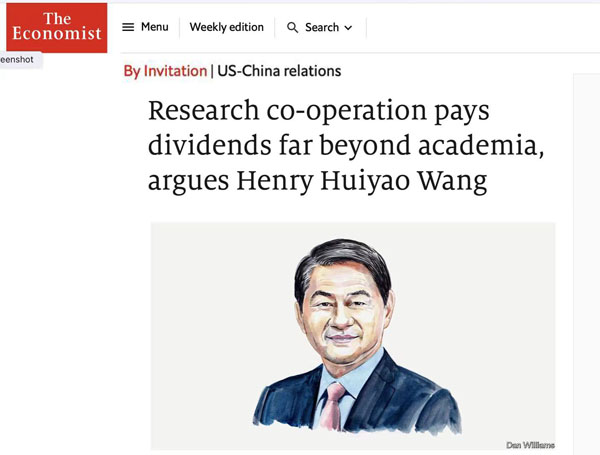 GLOBAL FLOWS of students, scholars and ideas have soared over the past two decades, proving to be one of the most resilient aspects of globalisation. By 2019 the number of higher-education students in a foreign country hit 6m, triple the number from 2000, while almost one-quarter of all scientific publications had cross-border co-authors, up from 18.6% in 2011. This exchange has created incalculable value in interpersonal connections, economic benefits and such fruits of collaborative research as the Human Genome Project and covid-19 vaccines.

Nowhere has the growth in global academic exchange been more visible than in that between America and China. In the decade from the 2009-10 academic year, the number of Chinese students on American campuses almost tripled, to 372,532. China and America are by far the largest bilateral-research collaborators, with more than 300,000 co-authored publications between 2017 and 2021. According to the Nature Index, which tracks such collaborations, between 2015 and 2020 the number of China-US co-authored papers in top-tier journals rose by more than that of any other international pairing.

However, there are signs that this tide of co-operation may be ebbing, owing both to the pandemic and to politics. In the first half of 2022, the number of Chinese applicants granted American student visas dropped to 31,055—less than half the pre-covid level. Meanwhile the number of American students in China has fallen from perhaps thousands to probably hundreds.

That slowdown is starting to show in research databases. Analysis for Nature, a prestigious journal, found that in 2021 China-US co-publications fell for the first time, while the number of researchers with dual China-US affiliations had dropped by more than 20% over the previous three years.

Covid-19 and its attendant mobility restrictions are part of the dynamic, reducing the flow of researchers in both directions, but signs of reduced exchange were visible before the pandemic. And similar trends are generally not seen between China and other major partners. In Britain, for example, higher-education applications from China soared by 59% between 2019 and 2022, and co-authored papers continue to rise. Meanwhile, in research we conducted at the Centre for China and Globalisation, we found that more Chinese students are going to Asian countries where it is felt they will be safer and less likely to be discriminated against.

Geopolitical and trade tensions dating from the Trump administration have also contributed to the chill. For example, the China Initiative, a Trump-era national-security programme focused on scholars and projects with a connection to China, faced claims of racial targeting and misconduct by the fbi before it was wound down in February.

At a time of rising frictions and global challenges, the revival and strengthening of China-US academic co-operation matters more than ever. First, bilateral exchange in education and science has huge benefits for both economies. In 2019-20, Chinese students contributed an estimated $15.9bn to America’s economy. They represented 35% of the international-student body—pupils who pay the full tuition fees on which many hard-pressed institutions depend. Many Chinese academics who remain in America contribute in key sectors such as technology and finance; those who return to China are a crucial force in spurring entrepreneurship and innovation there.

Second, China-US research collaboration will be critical for addressing climate change, pandemics and other challenges that no country can handle alone. Over the past five years China and America each accounted for about one-fifth of the world’s scientific journal articles. Together they have 3.3m research personnel, about 37% of the global total. Yet there is a risk that current tensions could affect scientific co-operation for decades to come, given that collaborative links endure long after students return home.

Finally, academic exchange is vital for stabilising and strengthening what is likely to be the most consequential bilateral relationship of the 21st century. Nothing can replace directly experiencing another country. Interactions with local colleagues are a catalyst for deeper interpersonal and commercial ties, trust, and a sense of connection that can withstand bilateral frictions. Cultural relations built through academic exchange can provide a route for dialogue when other channels may be difficult.

Crucially, academic exchange is key for the next generation of Chinese and American policymakers, scientists and entrepreneurs to be able to understand and work with each other. A survey conducted this year shows that Chinese people with experience studying or travelling in America have more-positive attitudes toward the country. It is also important that more American students cross the Pacific to study, learn Chinese and build a pipeline of China literacy for the future.

There is hope that as the pandemic recedes, China will open its borders and America will move on from the Trump administration’s ill-conceived policies, so that academic exchange can begin to recover and fulfil its vast potential. China is lifting barriers to foreign students, and more are expected after this weekend’s 20th Communist Party Congress.

Those collaborations that have continued provide promising evidence that long-held professional ties have remained strong. Away from the headlines, scientists continue to co-operate quietly on ground-breaking research in fields from astronomy and climate science to oncology, where researchers in New York and Guangzhou are running world-first joint clinical trials. We should hope that such exchanges are a model for the future. In a world where collaborative research holds the key to overcoming our greatest challenges, we cannot afford the two science superpowers to be divided.