On 13 December 2021 in Beijing, an international seminar on the 20th anniversary of China’s accession to the WTO titled “Twenty years of China’s WTO membership: from integration to interaction” was co-hosted by the Center for China and Globalization (CCG), the Network for International Trade and Investment System (NITIS), and China Institute for WTO Studies, UIBE. 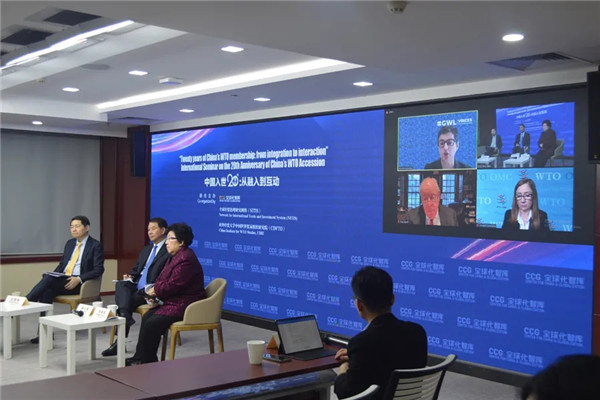 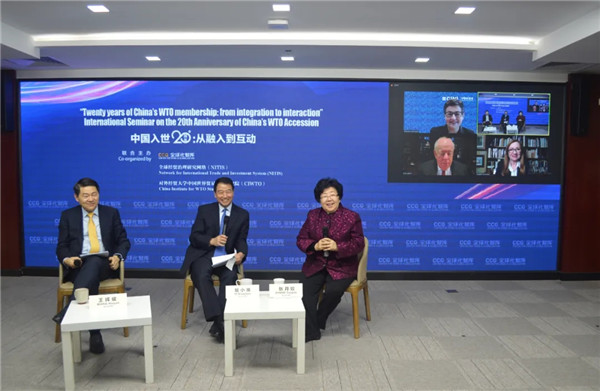 The year 2021 marks the 20th anniversary of China’s accession to WTO, reflecting how a large transitional economy was integrated into the rules-based multilateral trading system. This international seminar aimed to commemorate this anniversary and exchange intellectual insights to better promote the shared future of China and the WTO. 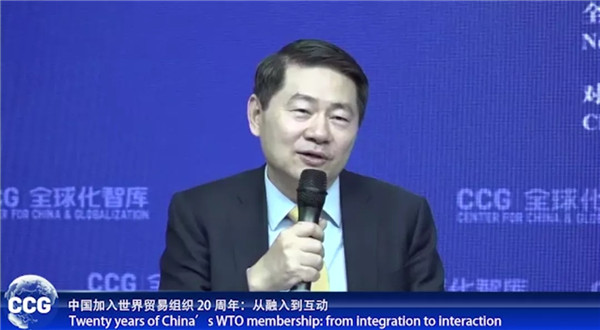 Wang Huiyao, president of CCG, said that China’s accession to WTO was of great importance to China, because China abolished numerous outdated laws in line with the WTO framework. China also contributed to the prosperity of the world economy through import and export trade. He emphasized the significant role of the multilateral trading system in sustaining world peace and stability. Wang Huiyao also pointed out that the need to advance WTO reform has become a consensus. In order to attract more countries into the WTO framework, there needs to be more effectiveness and leadership. In the meantime, WTO could work as a platform for different countries to rebuild multilateral trust and prompt more cooperation and dialogue on issues like vaccine distribution and investment in infrastructure construction. 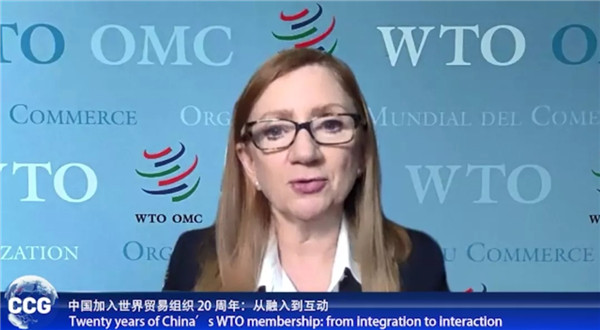 “Concerted effort is needed to reform the way that the WTO works and multilateral negotiations are very important,” said Anabel Gonzale, Deputy Director-General of the WTO. She stressed the dispute settlement system because it is critical to implement and enforce various rules in WTO. Anabel Gonzalez also put emphasis on reforming the institutional framework of the WTO, in which China also demonstrates active engagement. More attention should be paid to agricultural subsidies, rather than only focus on industrial subsidies. 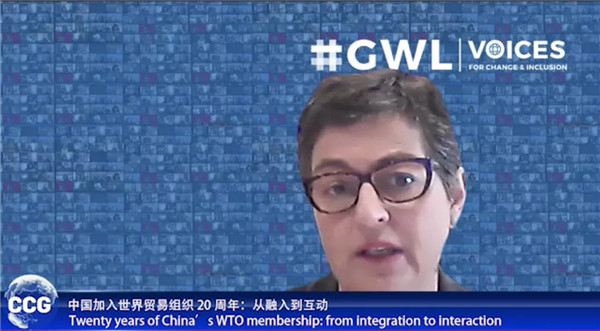 “The relationship between China and the WTO is strong but at the same time also delicate,” said Arancha Gonzalez Laya, former Foreign Minister of Spain. She said that the participation of China in the WTO has strengthened the legitimacy of the WTO as well as made the global economy more stable, because China represents one-fifth of world’s population. China has already demonstrated its responsible manner in the management of this global trading system. However, she also stressed three points of the fragile side of China–WTO relations. These are the huge impact of China’s accession on workers of the rest of the world, substantial reform of the WTO, and the negative sentiments of unilateralism and disengagement. Meanwhile, Arancha Gonzalez Laya emphasized that the world is not de-globalizing but re-globalizing, and that multilateral cooperation is the best and the most proper way for all countries because they are interdependent with each other. 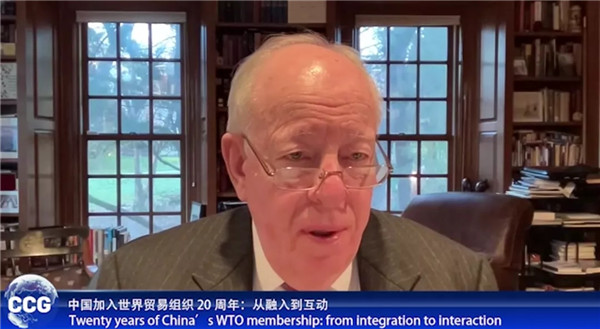 “China’s entry into WTO had a huge and far-reaching impact on both sides”, said Alan Wolff, distinguished visiting fellow at the Peterson Institute for International Economics (PIIE) and former Deputy Director-General of the WTO. He firstly acknowledged that the living standard of Chinese people was greatly improved after China’s accession to WTO. He said it cannot be denied that China has actively assumed its responsibility in accordance with its capacity. Alan Wolff also called for more reform with the lead of China and other like-minded countries in the field of trade liberalization, disputes settlement, and administration of the trade system. He also added that globalization is expanding and countries are more interdependent. China’s efforts to sustain the multilateral trading system over the next five years will be important. 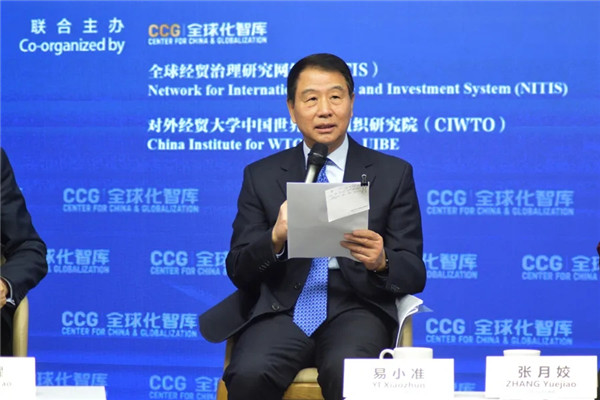 “The intersection of China into the WTO brought win-win outcomes to both China and the world because the accession of China has made WTO a truly international organization,” said Yi Xiaozhun, former Deputy Director-General of WTO. He also pointed out that mistrust was intensified in the last few years, which has led to a scarcity of high-level engagement and exchange. Under this situation, Yi Xiaozhun supposed that China should stay firm with global trade rules and further promote multilateral cooperation. Regarding the WTO system, China should actively participate in various events and adhere to the principle of openness, inclusiveness and non-discrimination. Finally, Yi said that the current mission for all countries should be finding out the solution to maintain multilateral cooperation, enhance the system, and push forward new reforms. 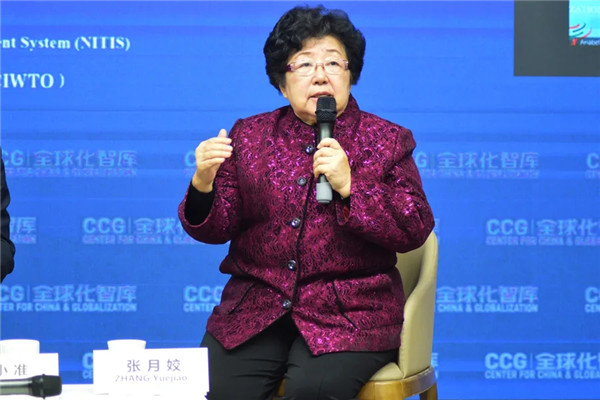 Zhang Yuejiao, Dean of the Institute for International Dispute Settlement in Tsinghua University and former Chairperson of the WTO Appellate Body, addressed some remarkable achievements after China’s accession to WTO, especially the spirit of openness and the rule of law. For instance, the unconditional MFN (Most Favored Nation) hugely promoted the relationship between China and other countries, and the active negotiations on the service domestic contributions which calls for great powers to reach agreement and build trust. She agreed that China’s accession to WTO was a wise win-win move. China’s participation made the WTO more representative of the world. At the same time, China’s business market also became more transparent under the WTO framework. 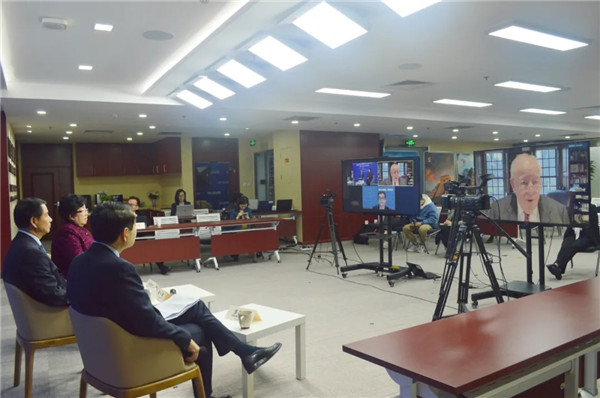 Through this event, panelists from academia, think tanks and WTO together reviewed the historical moments of China’s 20-year membership of WTO and looked forward to the future of multilateral cooperation within this global trading system.